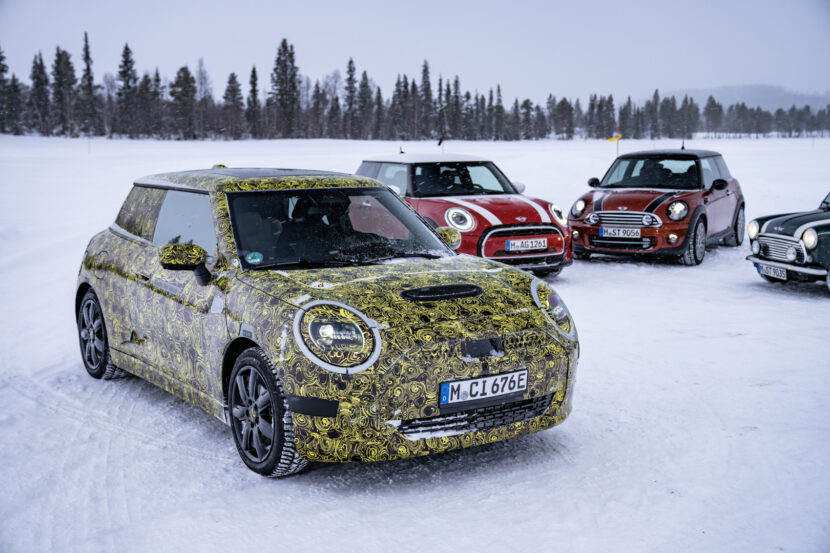 The future of MINI is all-electric, the brand has already said. Over the next decade, MINI will electrify all its models, gradually moving away from the internal combustion engine (ICE). However, there will still be some piston-powered MINIs in the near future before the brand is fully switched on. One of them was seen doing some disguise tests in public. (We do not own the photos but see them here)

The experimental mule seen in these photos is a standard MINI Cooper hardtop 2-door with some types of ICE powertrains, either petrol or diesel. We’ve seen an all-electric MINI Cooper in a spy photo before, and now its dino-fueled siblings are out.

It is clear that this test mule is actually an ICE-powered vehicle for several reasons. One is that it lacks the “Electric Test Vehicle” sticker, which is a legal requirement for all EV test mules in Germany, where the car has been spotted. The other is that it has a cutout for a center-mounted exhaust on the rear bumper. Typically, the MINI with the center exhaust is the “S” model, with some extra pony and some cool styling. However, the BMW Group is everywhere with its exhaust design, so who knows what it will be.

However, it is clear that this is not some kind of John Cooper Works model. Such a thing would be more aggressive body work, possibly a little roof spoiler, and a hood scoop. This MINI Cooper test mule has none of the things that make us believe that it is probably a normal Cooper S.

The camouflage of these photos prevents us from seeing most of its designs, although it’s not really hard to imagine what this new generation of MINI Cooper will look like. It’s going to look like a MINI … There are some interesting changes, such as the snug looking headlights and the door handles like the Flash i4. But, other than that, it’s mostly MINI.

While we’re most excited about MINI’s upcoming electric models, it’s nice to see that the internal combustion engine isn’t dead on one of Britain’s weirdest brands.